RPA (Robotic Process Automation) is one of the hottest paradigms for automating high-volume business processes these days. It makes sure that the repetitive, grunt work is allotted to some ‘software robot’ (aka RPA robots or automation bots) and the human resources are assigned jobs that need more cognitive skills. As a budding enthusiast, quite often you are going to face some of the following jargons. So here we present a list of terms that you are going find in almost any RPA discussion. 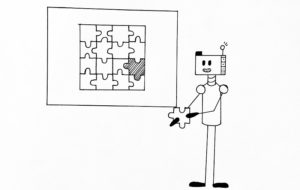 Desktop automation is a very specific type of Robotic Process Automation. In desktop automation, the so-called software robot is deployed locally in the agent’s machine (laptop or desktop, hence the name).

The software is initiated either on a fixed schedule or as and when needed. It takes care of the grunt work just like a human worker would, saving both time and effort, while she can take care of tasks that need more cognitive skills. While it has its downsides the management and security needs are much lower for desktop automation, on the other hand.

Enterprise automation, as the name suggests, is usually employed by large enterprises that deal with high volume transactions. The main feature of enterprise automation is that the software bots lie in a virtual environment (hence a full-scale data center is unavoidable), so control and security issues are of utmost importance. Contrast that to the desktop automation which doesn’t care much about the maintainability and security.

Other than the trivial and small projects, everything has to go through extensive planning stages. Smaller ideas dictate how the data is handled by an architecture. Hence the proof of concept is like a test run of an automation bot highlighting its feasibility and weaknesses. The significance of this step lies in the fact that it helps understand the capability and weaknesses of an automation scheme under real-life situations.

An RPA scheme in which the software bots need almost next to none human intervention to take care of the scheduled task is known as unattended RPA. As no human help is needed, the administrators can deploy, control and monitor them remotely in real-time fashion from a central hub.

Enterprise Resource Planning is, in general, a business process management system (usually a suite of software) allowing an organization to manage many of its back-office processes (such as product planning, manufacturing, and sales) in a single database. With the shift in the trend, recent few years have seen the rise of many new paradigms of ERP software namely mobile ERP, cloud ERP, and social ERP.

Other than these, make sure that corporate terms like Adaptive Automation, Business Process Management (BPM), Industry-specific processes, and Center of Excellence (CoE) etc. and more general tech terms like artificial intelligence (of course!), command-line interface, computer vision, deep learning, machine learning, and natural language processing are familiar to you (not alien, at the very least!).

Errors are one of the biggest obstacles in the way to becoming more efficient and hence, productive. To achieve high effectiveness in business activities, organizations need to minimize the number of errors (if not possible to get rid of them completely). This hazard is altogether raised with monotonous assignments as people will, in general, capitulate to fatigue and commit errors when doing tedious acts.

These undertakings are regularly attempted with less intrigue and subsequently, less attention. RPA can be utilized in these cases to supplant the human workforce and allot them tasks that are deserving of their time and exertion. By streamlining the workflow with the help of RPA, organizations can complete critical undertakings with ease.

RPA and workflow management tools (Smartsheet or Wrike, for example) are two pieces of the jigsaw puzzle. They have proved again and again that, if used carefully and according to a plan, these can be hugely advantageous for organizations. The circuit is formed by integrating them into the workflow at the same level, in contrast to other types of automation, and they work synchronously. RPA bot only acts once it receives confirmation from the workflow module, indicating a new task has arrived. The bot, in response, acts according to the assignment and returns the control back to the earlier module. In essence, these are two of the most fundamental blocks of the whole architecture.

A lower number of mistakes

A 2017 survey conducted by Forrester Research reveals the quite obvious fact: the primary benefit (<60%) of having automated bots, according to the managers, is reduced errors. Not surprising at all considering the fact that organizations invest a lot for detecting and handling errors.

You can get rid of the manual errors by implementing the Robotic Process Automation. A poorly executed job introducing errors can cause enough headache for the organization. When the RPA arrangement is finished, manual blunders are disposed of. Clients will never again need to grumble about blunders that you acquaint with their information.

A reminder: there are no silver bullets. Simply because an automated bot is supposed to work correctly doesn’t imply that it would. Even though a bot worked flawlessly for the last version of an application, chances are it might not for the present version as a lot might have changed. In the worst case, the testers would need to make sure that the automation bot passes all the test cases.

It’s no secret that software robots can perform certain types of tasks much quicker than human. And studies back this fact up as well – numerous studies indicate that integrating automation bots can decrease the latency up to 90%.

Many of the aspects, though, rely on the current condition of the underlying infrastructure of your organization. Consider an automated software bot filling up a form from some document – only a matter of microseconds, if not even faster. Contrast that to a human employee doing this manually. But again, the performance is capped by the underlying applications; if opening the form or accessing the document itself takes minutes, there is no meaning in automating the process, right?

Decoupling IT and technology

Separation of the technology from the business processes is indeed a useful trait. Higher independence implies automation can be implemented with restricted help from the IT division. Decoupling the technology as much as possible from the IT also implies that profound specialized abilities are normally not required.

Communication between the underlying modules is necessary though. The automation software can communicate with the referenced application and the communication happens through the UI. Robotic Process Automation can be coupled with a wide variety of frameworks and workflow management tools including Citrix-based, .Net or Java-based or web-based systems. The power of RPA lies in its versatility; it can be integrated with almost any type of systems starting from SAP software to a mainframe. This thus infers that RPA can be an option for empowering every one of your applications that might be not very much incorporated to collaborate.

One of the biggest challenges that the organizations face while implementing RPA in their workflow is the digitization gap i.e. RPA bots can only infer or work with electronic or digitally interpretable data. Simply put, they can only process digitized documents such as a PDF, document or email given the bot knows how to parse the data. In the end, we need a way to convert the non-digitized data into a digital form. Although techniques like OCR is pretty popular for this purpose, it can be quite a daunting task to automate and integrate it with an RPA bot.

Another limitation of a software bot that we glossed over just a second ago is the issue with the unstructured data (aka free-flowing text). Even if the data have been digitized somehow, the bot needs to be ‘taught’ how to parse the text i.e. extract useful information.

Lack of uniformity of the data can seriously hamper the usability and the versatility of a software bot. Say, as a developer, you are trying to create an RPA bot that would automate the processing of the bills. Now, as your company deals with a large number of different vendors, chances are quite high that the format of the invoice would vary from vendor to view vendor. How are you going to handle this situation?

The only option is to err on the side of more by taking into account all the field patterns. But that is neither economically feasible nor achievable in real-life. Besides, even after covering exhaustively every possible type of formats, there is no surety that one of the vendors is not going to change their invoice suddenly. Making sure beforehand that it is actually an economic solution is Indeed a good practice.

It has been argued over and over again whether AI should be coupled with the RPA bots or not. Despite the apparent profitability… of having an intelligent RPA bot, it has been observed most of the time that either it is not reliable enough or simply not profitable. And as it cannot do cognitive tasks where the bot has to ‘understand’ and then act accordingly, RPA cannot be used for that.

Take intent analysis for example. Many people might be sending you emails, and you want to create a bot that would open the mail, read it and then tries to infer what is written in it. Unless the bot is AI-powered it is nearly impossible to get it done correctly. Also, technology is a dynamic entity – it keeps changing all the time. Therefore, you need to keep the fact in mind that it can reduce the lifetime of your bot significantly if you do not plan carefully.

As more and more processes keep getting automated, an organization starts to develop a high level of dependency on the underlying framework. It only keeps growing as time passes. This can make upgrading the system or even rolling out an update very hard as even a small change might result in breaking the functionality of all the bots.

In contrast to the human resources, who are extremely adaptable to any minor changes, software bots are extremely rigid in the sense that even the change in the position of a textbox might stop the bot from functioning properly; or even worse, it might not even realize that it’s working incorrectly until someone spots it.

Automation tools are kind of like a twin edged sword. As a developer, you usually do not have the freedom to act at a snail’s pace. As the delay increases, it hurts the organization economically.

But act too fast and you risk jeopardizing the future of the software bots. Creating automation tools takes a lot of efforts – a significant amount of time and money is put into it. So, a wiser approach is to start small-scale. Automate the processes and see the results – is everything working correctly? Would it survive in the long run? Even if everything does not work out as planned beforehand, the loss would be manageable.

Robotic Process Automation is not a one size fits all solution. Every process has its own characteristics, in fact, it would even vary from organization to organization whether RPA is a good fit for it or not.

RPA can indeed be utilized to improve the overall workflow of an organization. But as you can guess already, RPA is not the only tool that can achieve the goal – there are 101 more ways of getting the job done. So, it calls for detailed planning and analysis of the whole situation. Otherwise, you would eventually be finding nails to use your RPA hammer on.

It isn’t constantly conceivable to robotize every one of the procedures totally. The ROI of the automation additionally contrasts from process to process. Likewise, it is critical to think about where this can be utilized because, in general, it can be slightly subjective. Business analysis of processes from RPA viewpoint and procedure mining are the keys to overcoming this challenge.