Programming is fun? Don’t you think so?

There’s so much to learn as a programmer. Working as a software developer isn’t just about learning coding standards. The kind of learning involved is continuous and lasts a lifetime. 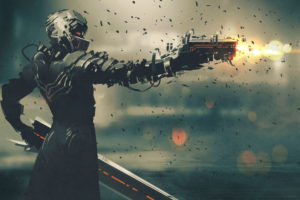 You learn about machine learning, data structures and algorithms, and graphics, among other interesting topics. Programmers also develop dry codes that are easy to read and maintain. You get to explore and play with libraries, atop learning technologies.

Whenever questions arise while working on a project or you just need some help, many programmers on StackOverflow are more than willing to give a helping hand. What’s more, the domain knowledge relevant to coding projects has no limit.

Programming also involves solving puzzles through solutions that are only available under certain constraints such as space, time, etc. You also get to learn new technologies while working out solutions to puzzles.

Furthermore, programming allows you to build interesting things such as games. In the process, you learn other coding languages such as C++ for encapsulation principles. HTML5/JavaScript can make it possible to add images or graphics to something you developed in C++. Isn’t that fun?

Programming also involves model building, lots of creativity, learning how things work, networking with other programmers, and learning from them, and getting things done. You’ll also make decisions that affect programs and their users.

With these kinds of experience in programming, you’ll never lose the motivation you need to do even greater things. It’s through actual programming that you realize how much you love coding.

Just like meditation, programming involves a deep focus on coding. Therefore, it’s important for software developers to take some time off work and relax their minds. One way for programmers to relax their minds is by playing the best games for developers.

Designed to use real programming languages such as C#, Scala, Java, etc., Robocode is a sophisticated game for programmers. It’s designed to help you learn how to develop robot tanks that fight each other.

It features fundamentals and tutorials to help you code in Robocode. Simply write an AI code to drive the robots to success. Access to the development environment within the Robocode installer is easy. The installer also features a Java compiler and a built-in robot editor.

With regular maintenance and updating of the game, you write real code using an addictive, open-source program.

Featuring an easy to use interface and fast action, this game is fun and interactive. Trust your gut feeling if you sense that the road you’re traveling on isn’t safe and things are about to get tougher.

With the cinematic and powerful voice, together with animation and brilliant graphics, you’re guaranteed an exceptional gaming experience and a strong cartoon feels like no other.

However, expect Ben to be beaten, accused of murder, and left to die by the roadside. Make sure you race from the start to the finishing line to help Ben get hold of the bad guys.

When not coding, train your brain with this game for programmers. What’s more, it’s so easy that your kids will also manage to learn to code.

Overcome challenges and solve game-like puzzles in CodeCombat using code. The game is both entertaining and educational. The “Classroom Edition” game element can help you learn new coding skills or even improve your existing knowledge.

Choose among Web Development, Computer Science, and Game Development course paths to either relax your mind or enhance your coding skills.

The World War II-themed game is available in a series for continuous gaming, making it one of the best developer games for you. The stealth-based first couple of games in the series were built in a two-dimensional top-down view. They include Beyond Castle Wolfenstein and Castle Wolfenstein.

However, the fast-paced third game known as Wolfenstein 3D was built in the first-person view. A protagonist, Jewish Polish-American Sergeant in the Army is featured in most of the games. He fights Nazi powers attempting to use occult, supernatural powers.

Although that’s true for earlier games in the series, the latest titles are set in a different historical setting where the Axis powers won World War II.

Scripted creeps aka creeps is a JavaScript game based on MMO strategy and one of the best games for programmers. Use Java to program in-game entity behaviors and develop an empire. It gives you 30 plus days of full access to a private server you can use when playing the game.

Once the 30 plus days elapses, you can continue playing the game, but with limited server access. If you’re so much into the game, you need a monthly subscription to regain full server access.

Based on elevators used to efficiently move people across buildings, this game is key to testing your knowledge and skills in JavaScript. First, move about 15 people in less than a minute, progressively moving to more complex challenges.

How good are you in the flexbox? Move gun towers along a path into strategic positions and fight continuous forthcoming enemy waves to sharpen your flexbox skills. Just like Flexbox Froggy games, it uses similar commands.

Developed by id Software, Doom is a first-person narrative shooter video game and one of the best developer games you can try. Take the role of a space marine and fight Hell-sent demonic forces. The Union Aerospace Corporation released the demons on Mars, a planet set for colonization in the future.

Unlike Doom 3 that takes the approach of slow-paced survival horror, Doom 1 and Doom 2 are open-ended fast-paced action games that’ll keep you thrilled and excited from the beginning to the end.

Execute “glory kills,” perform character upgrades in a traversal environment like never before. Make sure you check out “SnapMap,” an editor, and a supported multiplayer component-based online for even more entertainment.

Do you love coding in a way that’s different from other developers? Code Hunt, one of the best games for developers, allows you to identify code fragments and play. You also get to analyze the codes and alter them as necessary to match and capture the code in use. Play this game to learn C# or java.

GodinGames is designed to suit all the gaming needs of developers. It is a pure coding game, so it can help you to master any programming language of your choice. Moreover, with this game, you have the best chance to play with your co-workers and friends, take part in several programming contests, chat with many like-minded members of the community, and track your performance with easy on a leaderboard.

CheckIO is one of the most popular games that best suits Python and Javascript coders. In this game, you can create missions, master the coding languages, and challenge your peers. CheckIO, therefore, allows gamers to sharpen their coding prowess through a community-based effort.
For beginners looking for games with a self-tutoring community, where feedback and code review are standard game elements, CheckIO is the programming game they need for the best experience. However, experienced coders can also benefit from the competitive coding environment and the fun that the game promotes. Moreover, given that CheckIO is a free game, anyone can get started with it immediately.

This meta-JavaScript adventure game is the best for testing the Javascript skills of gamers. With Untrusted, you can get an objective evaluation of your ability to solve problems. Through a machine continuum, you can alter Dr. Eval to move between levels. Given that this is also a free-fun game, it allows you to practice more complex coding skills conveniently.

Out of the many exceptional games for developers that Zachtronics has released, Shenzhen I/O is well known for its similarity to hardware programmer’s work. In this game, you get a 47-page technical manual that helps you understand several microcontrollers’ inner workings.
But Shenzhen I/O is for programmers who are looking for technical challenges. The game can go the extra mile of having its entire user interface being a virtual desktop.

Codewars is an online platform that allows programmers to play a wide variety of fun games and acquire ‘ranks’ based on the technicality of the problems that you solve. The games are suitable for learning programming languages such as Ruby, Python, Objective-C, C, and C++.
Advanced coders go as far as using Codewars to conduct different types of interviews.
They understand the fact that the games are efficient for assessing the programming language skills of programmers. So, if you want to see how you can compare to your peers, you have reason to give Codewars a try.

Whether you play games for fun, to pass time, or just relax your mind from a busy coding week, there’s so much to learn from whichever interactive games for programmers you opt to play. RPG for programmers is key to improving your coding skills. Work on challenges to improve your programming skills.

The commonly known definition of a warehouse is a place to store things. These things could include food, electronic supplies, transportation material, or any goods...

If mainframe z\OS does not support your favorite programming language, there is no need to worry. Mainframe hardware allows deploying a Linux/Unix environment. However, you...