All You Need to Know About Less, Sass and Grunt - ByteScout

All You Need to Know About Less, Sass and Grunt

In this tutorial, we will talk about Less and Sass. They both are CSS frameworks that aim to simplify your cascading style sheet by making them more flexible, more compact, and more maintainable. The last section of this tutorial is about Grunt, a background task runner that will help you to organize and automatize your process.

What are they and why do we use them?

The cascading style sheet is a static component. It means that there’s no way to introduce something dynamic like variables or conditional statements. Right now, the only feature making dynamic CSS is media queries but they are for responsive design purposes.

The community envisions bringing a new way of writing CSS files and it comes to reality with the use of CSS pre-processor tools that do exactly Less and Sass. More concretely, Less is build upon javascript and SASS (Syntactically Awesome Stylesheet) is a Ruby-based framework that compiles (most often the community uses the word “transpiler”) a new type of CSS file (.less for less and .sass for Sass) to standard CSS format (which is actually the only format that the web browser can understand). Less or Sass files are slightly different from native CSS files because they both introduce the concept of local and global variables, functions, mixins, nested components, importing external components, and doing inheritance at CSS level. Now that developers have all those new features in hand, they have a flexible way to generate their CSS files and they will stay aware of the DRY pattern (Don’t repeat yourself).

Should we now use Less or Sass in our project?

Neither of the two is mandatory and you can always use the old style. Your website is growing up quickly or you’re facing a major change of the page layout design and you begin to have a problem maintaining a well-structured CSS all the time. Less and Sass prevents all of that.

You should rethink your cascading stylesheet strategy plan to simplify the developer task and to ensure the quality of your stylesheet. Less and Sass are the right tools you need.

How do they work and how to use Sass and Less?

Supposing that you already have all the required components (we’ll see different ways to configure your environment shortly) the first step is to write your .less or .sass files. Then you call your transpiler that will compile your extended CSS file( less or sass depending the case). If errors occur during this compilation step, we’ll get noticed with error messages. This ensures that your final CSS is free of errors. If everything is ok, the transpiler finally generates the definitive CSS file that you’ll send to the client web browser. That means you’ll have neither .less nor .sass contents at the client page, he only sees CSS W3C compliant code.

In order to use Less or Sass, you need the following skills:

– Have a good knowledge of CSS. Less and Sass extends CSS it is mandatory that you know basic CSS.

– Learn Less syntax or sass syntax depending on the need. This tutorial will cover the most important features for each of them.

You also need the following a Less or Sass compilers. For example, you can directly download less at http://lesscss.org/#download-options or use an online compiler like http://winless.org/online-less-compiler. You can even install dedicated software like Simple https://wearekiss.com/simpless or http://compass.kkbox.com/. You can also use NodeJs and install Less/Sass packages in order to use the associated command-line interface, later on, this is definitely the commonly used practice. You can easily find a lot of articles describing this process. In this tutorial, we’ll use the famous Visual Studio 2015 Community plugin named WebCompiler. You can download it at https://marketplace.visualstudio.com/items?itemName=MadsKristensen.WebCompiler

The advantage of this tool is the simplified installation process, no configuration needed, just install and use it like other visual studio plugins. If you are an asp.net developer using Visual studio, WebCompiler is the best plugin to have in order to use Less, Sass and many other things with the minimum of effort.

This section shows you the essentials knowledge you need in order to manipulate less or sass file in Visual Studio :

You can create less or sass file as shown below:

The screenshot below shows how to generate a CSS file from a less file.

Note: You should always link your webpage to the CSS file instead of the *.less or *.sass files.

CSS files are now issued by a compilation process

Any mistake on the .less or .sass file will end up with a compilation error. The compiler displays a warning or an error message and it doesn’t generate the CSS file. This incredible feature ensures that the CSS is always free of malformed expressions.

Note: Intellisense still be available for less or sass files, it simplifies our development task.

In this section, we will enumerate some interesting features. This is not a complete Sass tutorial, we just list all the main options you can do with them. Sass or Less accomplish the same thing only the way differs.

We create a function named .set-text-style first and then we call this function with the value “bold”

There are also built-in functions. You can see the entire list at http://lesscss.org/functions/

You can also do conditional checking

Less and Sass can both managed global and local variables

You can import external data by using @import ( @import is a feature of native CSS). The compiler is able to resolve those dependencies before processing the local file.

As stated earlier Less and Sass accomplish almost the same thing, at the end of the day you’ll get the same CSS file. However, there are some points that make a big difference between them and using Sass (or SCSS) is recommended for the following reasons:

– You can actually between two styles of programming in Sass. You can write in Scss style which looks closer than natural CSS. You can also use Sass syntax which is slightly different.

– Mixins are well managed by the use of @mixin and @include keywords. Less declares them as CSS class that may be a source of confusion

– Sass uses @extend for inheritance and property sharing. The equivalent keyword is: extend but it still is more complicated to use and read.

– Sass explicitly uses a common conditional statement like @if @else if @else, Less doesn’t.

– Sass offers a smart way to use loop statements with @for keyword. Less hasn’t such an operator but it is always possible to do the same thing using recursive statements.

– Sass has a great all-in-one extension named Compass (http://compass-style.org/) which offers many features to accelerate your development (grid system…). It is highly recommended that you use Compass if you use Sass.

You can learn Sass at http://sass-lang.com/documentation/file.SASS_REFERENCE.html.

Rather than being a developer tool like Less, Sass, NodeJS, or something else, Grunt is a DevOps tool that manages the automation process in your project. As a process manager, it can automate compilations, bundling, minifying, unit testing… the list is very long but in a few words you can plug any instructions to the Grunt engine and it will manage all the tasks in the order you’ve specified. Grunt is based on Javascript language and it has its own CLI in order to do live queries. It also has its own configuration file where you can store your tasks.

Note: Grunt runs at the server-side even if it is using javascript. Grunt tasks can access the local filesystem.

The rest of this Grunt js tutorial is about using Grunt with Visual Studio 2015 Community.

Installing Grunt to the local project

After creating a new web project (the project type actually doesn’t matter, we can use any type of project), you will add the following two packages.

After the installation process, you will see the folder.bin where you can locate the grunt command grunt.cmd 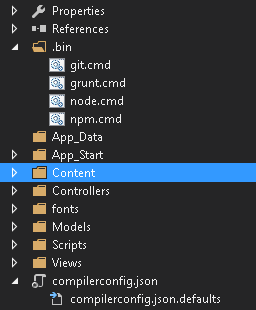 If you try to compile the project at this time, it would fail because the Grunt module is not installed yet.

You need to install grunt

Open a command prompt and navigate to the local .bin folder (see above)

At the end of the installation you should have something like

The compilation should be good at this stage.

The next step is to create the project Gruntfile.js – it is the Grunt configuration file

The Gruntfile.js is where you init grunt, declare all grunt tasks, and load grunt plugins. The content initially looks like

We have to install the grunt-contrib-copy plugins 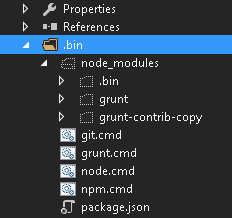 To copy all .less files in the Content folder to the backupless folder, the tasks should be configured like

How to run Grunt tasks?

To run the task, you just have to right-click the grunt config file and Task runner explorer

The previous program describes a unique process where source files are taken from the src value and destination folder is the dest value. We can also apply a filter:”isFile” which copy only existing *.less files in the current working directory.

Concatenate all js files to one output file

You need to install the grunt package names grunt-contrib-contact to achieve the file concat.

The Grunt configuration file is updated as following

The separator options add a semicolon at the end of each file, it is recommended to use it to avoid js error. The task is about aggregating each js file in the Scripts folder to a unique file named bundle.js in the js folder.

We can compress files with the package named grunt-contrib-uglify.

Grunt is a powerful tool that allows you to automate all your process. You’ve seen that it can interact with your project and any underlying parts like the file system. The setup part is the only tricky part, once configured you’ll be free of all repetitive tasks during the deployment stage. At the time writing of writing, there’s an alternative to Grunt: Gulp. The community states Gulp as a more flexible, more powerful, and more simple than Grunt.

Elance vs Odesk vs Freelancer

The was an article TIFF vs PDF some time ago. This one is more detailed about TIFF. TIFF stands for Tagged Image File Format. TIFF...