History of RPA and Business Automation

We live in a world where the market is becoming increasingly dynamic and the competition is aggressive. Corporative rivals are mercilessly fighting back and the survival of an organization that bases their business on traditional concepts has been called into question. 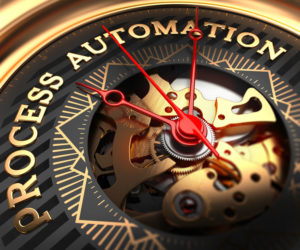 Intensive development of the computer and communication technologies has led to the globalization and integration of business processes and markets. In order to keep existing in today’s market, firms need to become part of the global business mechanism. This, in turn, requires operating in an IT-driven business environment.

Evidently, we have come a long way since we first started thinking about automating a process, yet alone a business process. Let’s take a closer look at the timeline of our past to better understand the evolution of business automation.

Where It All Began

In order to minimize human assistance in a task, we have come up with the term automation. Automation is the management of a machine, process, or system with the help of mechanical and electronic devices that replace human labor; as well as the monitoring and decision making in jobs that are too complex, dangerous or tedious for a person.

Since the beginning of civilization, there have always been attempts to construct machines and devices which attempted to replace physical labor.

About 4,000 years ago, the Mayans first started automating their work. Since they needed a way to transport water through their cities and to remote, barren settlements, they built aqueducts. We can already pinpoint three crucial variables in this concept: the technology that the ancient tribe created made the water transport process possible.

In the above example and many others from our past, automation has always been a chance to add value to the already existing model consisting of the process, the people, and the technology. This logic continued all through to the industrial era. In fact, let’s look at another important historical event which ultimately led to the idea of business automation.

Back in the year 1913, Henry Ford managed to reduce the price of an automobile to the point wherein was no longer just a toy reserved for the rich. Suddenly, people from around the globe could afford to have a car.

Ford’s success was achieved through the automation of the production line – each worker performed one operation on the assembly of the vehicle, after which the subsequent worker would continue to mount the components, and so on until the completion of the vehicle. The effects of this process were astonishingly effective.

However, the concentration of machinery, the complexity of production, and the division of labor increased the role of the human mental struggle. And just like that, a desire to create a machine that would replace our brains was put into motion.

The mind was closely observed looking for functions that could be routinized and mechanized. Thus, the widespread application of the so-called information machines began. The era of automation is deservingly known as the second industrial era.

An Idea in The Making

Business process automation in the 40s was still only a vision. The reason is that the world simply wasn’t developed enough yet. To put it boldly, there were pens and papers, stamps, registers, binders, shelves, and that was about enough to secure the business of a company.

With some well-structured organization, it was possible to respond to all the requirements of the business system of the time. On the other hand, if we imagine a scene like that in today’s business system, it would hardly be possible to execute any business with as many resources as possible.

Not too long after this phase, the first time that a computer was ever used in business purposes was back in 1954. Its creator was John Simons from Cambridge University and he named the computer LEO – Lyons Electronic Office. The first official users were a British tea store and a catering chain.

From this point on, there was no going back.  The ever-present need for better control of business processes emerged as a consequence of the decentralization and globalization of company operations.

Furthermore, the information age has shifted the intertwining people-process-technology paradigm. With the launch of enterprise resource planning systems in the 60s, computerization of data-driven company tasks commenced, and the first business automation solutions started emerging.

During the 80s, a functional i.e. vertical perspective prevailed in management, which emphasized rigorous managerial control. The strong, functional structure led to the creation of isolated departments or the so-called silos. Business and operating results were monitored individually at the departmental level and this led to inefficient business operations.

Later, in the 90s, the academic community and the business world both began to be attracted to the concept of business processes and business process orientation. In fact, Business Process Management – BPM has been one of the most talked-about topics in both management and IT circles since the mid-1990s.

Very often, the reason for such a storm is just a trend passing by, but in this case, it was the nature of BPM. Specifically, when Michael Hammer and James Champy published their book, Reengineering the Corporation: A Manifesto for Business Revolution, in 1993, they set high expectations. Their book was greeted with enormous enthusiasm.

BPM was simply returning the focus to what really mattered in business – the business itself. According to this new, horizontal perspective, business processes represented the functioning core of an organization – not products or services.

The concept of a modern business implies the internal and external integration of all business processes. Information, as the essence of doing business, has become the integrating factor between the trading system and the market.

Contemporary business trends and the increased efficiency requirements have encouraged the development of tools meant for monitoring and business process analysis. These tools are a crucial part of advanced solutions for business process management automation.

Through such methods, quality and consistency are guaranteed. Furthermore, the operational efficiency goes hand in hand with saving time and reducing the costs of completing a task successfully.

Business automation has experienced a huge expansion alongside the development of computers and the information technology world.

One of the more intriguing aspects of business process management we look forward to is the use of robotics and artificial intelligence. Just as one makes decisions based on their knowledge and experience, the computers of our future will use database knowledge instead.

Lastly, a real downside to the forthcoming evolution is that the use of automation will inevitably lead to the minimization of the subjective factors and potential errors in the end result of implementation.

How to Increase the Speed of SQL Queries?

SQL (Structured Query Language) is the most widely used programming language for creating and designing relational databases, and for the fulfillment of various operations on...

Google is the best thing that could have possibly happened to mankind in so many centuries. Not only Search engines, but Google also provides various...