There are two unofficial file extensions, as well, namely .m4A, which is audio-only, and .m4p, which stands for the protected MP4 file format.

Although people most often associate MP4 with audio and video, because it is a container, it actually can hold other types of data, too. For instance, it can hold images and subtitles. Other file extensions, such as .M4v, .3gp, .M4R and .AAC also are associated with MP4 along with .mp4, .m4A and .m4p.

MP4 is a more specified version of a general-purpose ISO media format based MPEG-4 Part 12 file format. MPEG-4 Part 12 is based on Apple’s QuickTime audio/video file format. MPEG was developed in the year 1998 by Motion Picture Expert Group (MPEG), which is also credited with having set the standards for video and audio data encoding.

The purpose of developing an MP4 file format was to introduce a video and audio file container that could hold low data audio and video files used on the Internet for streaming. When MP4 file format was introduced, the World Wide Web was gaining popularity, and an audio/video format consuming low bandwidth was required. 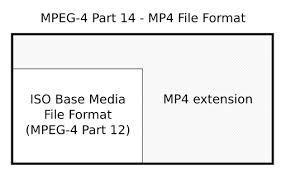 The only disadvantage of the MP4 file format is from the editing and movie-making point of view. MP4 files are not easy to edit or update. For example, importing files in the MP4 format into video editing programs sometimes causes those programs to crash, audio is missing or the video shows no images.

Audio also can drift out of sync with the video or the video can be distorted. This is often related to codec issues. Editors also might not recognize or import the MPEG file format at all. Still another issue is that files in MP4 container format can require a lot of resources to playback and edit.

Basically, these are the main MP4 disadvantages.

How does MP4 work?

Personal media players that support MP4 also still are popular, although consumers often use their smartphones and other devices instead of buying standalone players. Most users who do buy standalone players buy ones that are MP4 capable, rather than opting solely for an MP3 player, because MP4 support offers the option for video content rather than just audio.

Probably the two most popular programs for playing MP4 are QuickTime and Windows Media Player. But many other applications, such as VLC, support MP4, as well. Which you use usually comes down to the application’s ability to support other additional formats and features you use frequently.

MP4 file format is among the best video file format options for audio and video content. This is largely due to the combination of exceptional quality, small size, multi-platform support, and streaming compatibility. While other formats might work for specific needs, MP4 can be seen as a good default choice.

TOP Things About Cloud Computing in 2020

Cloud computing gives more uncomplicated access to the server, warehouse, database, and application support, with users supplying and utilizing the least set of specifications to...

Computers own the code. This code is not a secret and it doesn’t have to be stolen or changed in order to understand its meaning....