Heroku is a well-known platform as a service (PaaS) solution, founded in 2007. It is a promising platform for developers as it gives them the ability to deploy and run applications without worrying about the underline infrastructure. The Heroku service offers a robust ecosystem comprised of integrated data services and managed container system.

So, what makes Heroku tick? How does it work? Let’s explore it in detail.

Heroku’s is a place for applications to live. At least, that’s what most developers or users will see. The developers utilize Heroku to host apps. They go to the backend of Heroku solutions and create a simple “Heroku” app.

Once done, the code is pushed from the git repository. From there, developers can enjoy seamless application development and deployment. To facilitate the whole process and enable developers to work as seamlessly as possible, developers get access to more than 175+ add-on services. These services include uptime alerts, database services, metrics, automatic backups, and more!

As Heroku is a platform as a service(PaaS) solution, it requires a transport mechanism to deploy the code. Developers can opt to transfer code via SCP, network shares, or even FTP. However, Heroku utilizes Git as a way of transport. They utilize Git because it allows source control management which is the modern way to manage applications.

For developers, this means that shipping code is easy to Heroku. To connect with your application on Heroku, you need to use SSH.

You also need to add a git remote using the following command.

Once set up, you can now easily push and pull code.

Heroku comprises multiple key elements. However, two components encapsulate the core idea behind Heroku. These concepts are Routers and Dynos. 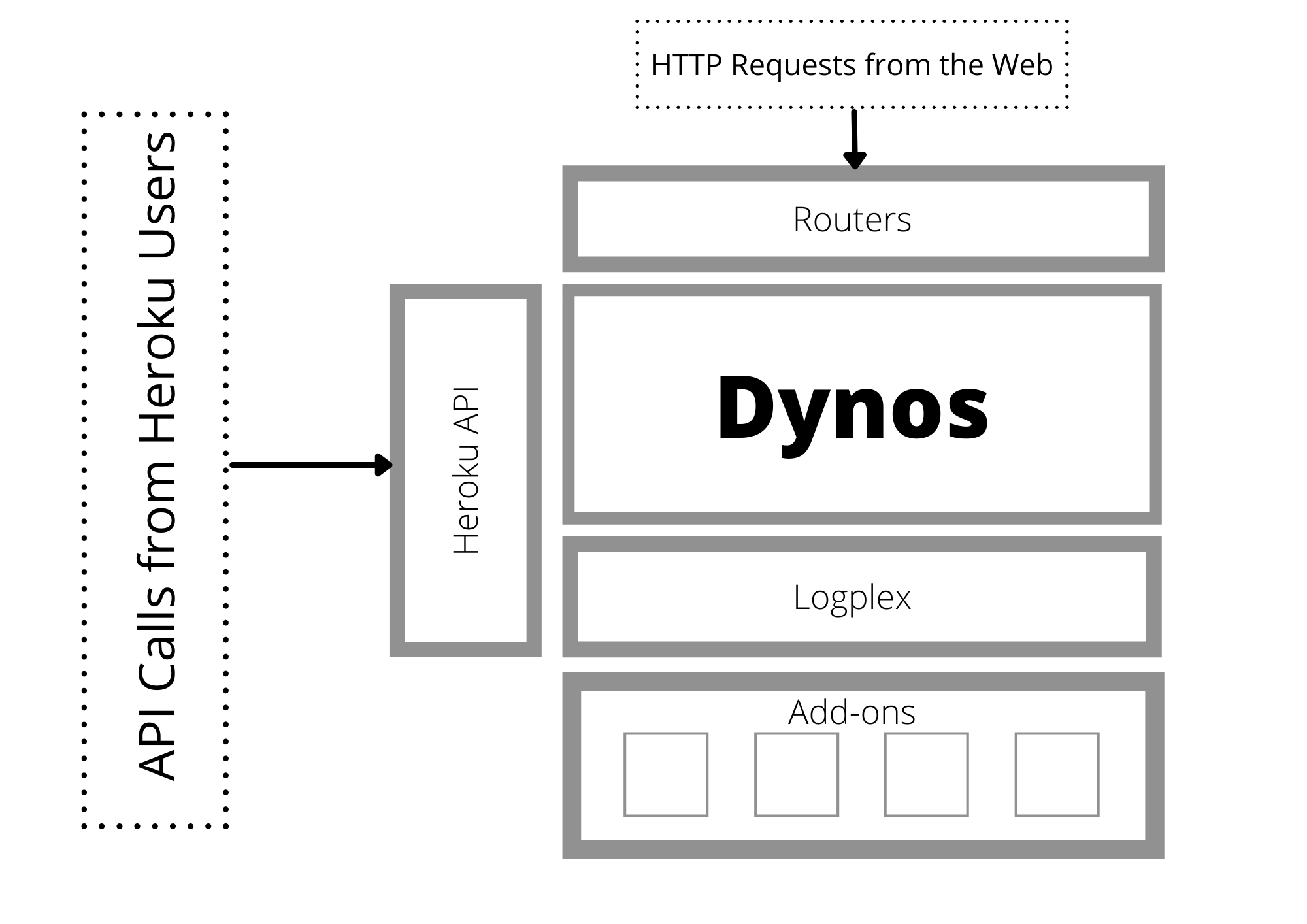 Just like Software-as-a-service(SaaS) solution, PaaS is also billed by the resource you are using. In this case, you are going to get billed by dyno/hour.

But how does it identify the dynos to which the requests need to be sent? Well, in Heroku, each dyno is paired with the application code. Once a developer sends the code to the dyno, it is compiled to “slug.”

Slug is an application pre-packed copy that is optimized for distribution in the dyno. The slug also contains the necessary runtime layer as well.

Next comes the config vars. As we know by now, once a slug and build pack is launched, they are assigned to a dyno — a Linux-based container. These dynos can be scaled and hence are a great approach to the needs of the developers.

On top of that, at any given time, developers can deploy a codebase in numerous ways, including staging sites, production sites, and local environments. This means that despite the codebase, there are plenty of deployments to meet the requirements. This is where the configurations come in.

Each deployment must have its own configuration depending on the environment. For instance, if the developer aims to deploy it to Amazon S3, he needs to configure it to include the credentials for performing tasks.

To offer better security and isolation, each deployment has its own config cars. The approach means no errors during deployment handling. It is also helpful when it comes to managing complicated apps.

Next, we have the releases concept.

The release is a combination of the application code slug and the configuration file. The release is also an important part of the Heroku as it is generated as soon as you make a new change. This lets developers quickly go back to a previous release if something goes wrong.

To create a release, the developer needs to use the heroku releases command line.

Lastly, we have the add-ons and logging.

Heroku’s add-ons are crucial to the platform as they are basically services that you can install and use with just one click installs. At the time of writing, Heroku offers 175 add-ons spread across 24 categories. As a developer, you can use these add-ons via a free trial. But, if you want to get the most out of the add-ons, it is better to invest.

Logging allows Heroku to simply the whole process. It creates the logs so that routing can benefit too. Heroku utilizes Logplex – a distributed collation and routing solution. To check the logs, you need to type the following command.

Heroku undoubtedly makes it easy for developers to manage their applications. With a wide variety of programming language support and an impressive way to handle code and application, you will find Heroku to support your development process. In short, you need to focus on the development process while Heroku takes care of the infrastructure.

All You Need to Know About Lambda Programming

Lambda expressions in Python In lambda programming, a definition of a function not determined by any object is called the lambda expression or the anonymous...

How to Generate BarCodes with ByteScout Barcode SDK

In this article, we'll see how to generate barcodes with Bytescout Barcode SDK. Generating different types of barcodes from scratch can be challenging for developers,...