Aztec Barcode is a high density, high capacity barcode. It is a type of 2-D barcodes. Aztec code is able to encode ASCII as well as Extended ASCII characters. The Aztec barcode consists of black and white square modules like other 2-D barcodes. Aztec code can encode modules in the range from 15 x 15 to an upper limit of 151 to 151 modules. If Aztec code utilizes its maximum storage capacity of 151 x 151 modules it can encode 3000 characters and around 3750 numerical digits. 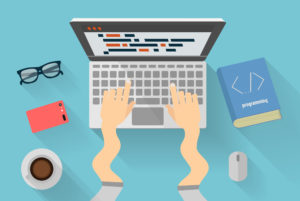 Aztec Code is able to encode all 8-bit values such as 0-127 ASCII and 128-255 ISO 8859-1. Therefore, making it, unlike other 2D barcode types. The Aztec code has the potential to use much less space than other matrix barcodes.

AIM, Inc, in 1997 published Aztec code for the first time. Andrew Longrace Jr and Robert Hussey are credited for having designed the initial barcode standard in 1995. The centre of the Aztec code is similar in resemblance to the Aztec Pyramid. It is for this reason that this code has been named Aztec barcode.

The symbology of the Aztec barcode is the hallmark of its design. It contains dark and light square data modules as well as a finder pattern of concentric square rings centred on a single dark module located in the centre of the symbol. The symbol was designed to have a bulls-eye pattern at its centre for locating the code. It was built on a square grid.

The data represent square rings surrounding the bulls-eye pattern and adding it in layers. Each one of these layers is made up of two rings of pixels, giving total sizes of 15×15, 19×19, 23×23, and so on. Orientation marks are included at the corners of the core that allows the code to be read if rotated or reflected. The part of the symbol which is not utilized for data is used for the Reed-Solomon error correction based on the user-selectable check word percentages.

Aztec is a 2-D barcode. Like other 2-D barcodes, the major purpose of developing the Aztec code is to provide a data encoding mechanism that could encode a large amount of data in a small area due to high density and which has substantial fault tolerance and error correction mechanism. Aztec code satisfies these requirements.

Aztec Code should create readable codes with different printer technologies as well as for displays of smartphones and other mobile devices. However,  A two-dimensional imaging device like a CCD camera is needed to scan the figure. Decoding starts at the corner with three black pixels and proceeds clockwise to the corners with two, one, and zero black pixels. The variable pixels in the central core encode the size, so there is no need to demarcate the boundary of the code with a blank or quiet zone.

However, the only unrestricted feature in Aztec Code designation that Barcode Professional allows is known as the Aztec Runes. These are a series of 256 small machine-readable marks but only available for special applications.

An advantage of Aztec codes is that they do not require a surrounding margin.

This permits for a very fine level of error correction, and there is tighter encoding. Since it is optimized for a wider range of message texts by storing more information, it is useful in discrete environments. For instance, Aztec codes are more likely to be found on a variety of patient-safety applications such as patient identification wristbands, IV mixtures, medications labels, blood products and specimens. Whereas, QR codes will most likely be used for mobile applications.

In summary, Aztec codes can store more data, but there is poor free support for them. QR codes demand more space than Aztec codes but have a ton of freely available software support.

Blockchain Inside Out in Simple Words

Two years ago I wrote a post called "Brave Decentralized World" mainly focused on the subject of decentralized networks. It was packed with a brief...

The Most Powerful Machine Learning Techniques in Data Mining

Advanced machine learning techniques are at the nexus of informatics in every industry and field of inquiry, and data mining is among the most intensive...