TOP-5 Smart Contracts and How to Use Them - ByteScout

TOP-5 Smart Contracts and How to Use Them

If you use or create technology in any way, you’ve probably heard all about Blockchain. But what exactly is Blockchain? How does it tie to smart contract platforms and cryptocurrencies like Bitcoin? Let’s unwrap some Blockchain fundamentals to see how the technology links to formal agreements.

In essence, Blockchain is a digital ledger that records transactions or other data. The ledger is shared across many computers. Everyone within the peer-to-peer network can see all the transactions and acts as an administrator. Thus, transparency and the ability to validate is high. There’s no need for a single regulator. The network reconciles transactions every 10 minutes. All the transactions reconciled in the 10 minutes is a “block”.

Blockchain and finance are closely connected. Individuals within the Blockchain network can win Bitcoins, a digital Blockchain cryptocurrency, by solving mathematical puzzles. This is known as mining. This was the main reason developers created Blockchain.

Blockchain and Bitcoin have been around roughly since 2009. Professionals credit Satoshi Nakamoto with their development.

The concept behind Bitcoin Blockchain technology laid the foundation for dozens of other cryptocurrencies aside from Bitcoin. Examples include Litecoin, Zcash, Ethereum, and Ripple. It’s becoming more accepted to use Blockchain for payments as a result. But the technology has such enormous implications for data sharing and security. So professionals are focusing heavily on ways to apply the framework itself beyond cryptocurrencies and Blockchain payment systems.

A smart contract, or crypto contract, is simply a program that controls the exchange of money, property or any other asset you have. The digital contract still defines terms and conditions like a traditional one. But smart contract programs place the contracts into the Blockchain ledger. This means all the benefits of Blockchain, such as security and transparency, apply. The programs also allow for automated enforcement of terms of the contract.

Right now, as Blockchain gains even more footing, the demand for developers is enormous. Pay for work related to Blockchain smart contracts thus is high. For instance, according to SimplyHired, a Solidity developer easily can make between $100,000 and $200,000 a year.

Blockchain and smart contracts still are evolving. But they have dozens of potential uses. So they are considered the third innovation in the Blockchain story after the Blockchain database and Bitcoin. One somewhat obvious area that faces serious disruption is legal to work. Blockchain contracts can be enforced without a middleman. So you would not necessarily need to go to an attorney to complete many legal processes. Experts believe smart contracts are viable for situations like insurance premiums, crowdfunding, property sale/purchase and even streamlining everyday business operations.

This smart contract implements an online totalizator where you may place a bet on a dice game to guess the number from 1 to 99. Then a virtual dice rolls and you may win and get a profit if you were right. The game is decentralized and is powered by a smart contract and a random number generated by the external random.org (as blockchain can’t generate a secure random number).

This smart contract implements an exchange to exchange Ether or any RC20 tokens. It checks if there are enough funds (tokens) on accounts on both sides of the deal. The great thing is that this online exchange runs completely as a smart contract inside a blockchain, no dedicated servers required. This is a great example of actually replacing a middleman with a smart contract running on a blockchain.

This smart contract allows depositing funds for a given time. It will not withdraw funds back until the initial set time duration passed and not earlier.

This smart contract from Solidity samples documentation is for blind auction implementation. Blind auction means that all participants will see the winning bid only once the auction ended. During the auction, participants are sending their bids to the auction address. The bid is accepted if it is higher than the previous top one but immediately returns to the sender if it is lower. So if your bid is the highest then the bid is accepted and is held until the higher bid arrives or the auction is complete. 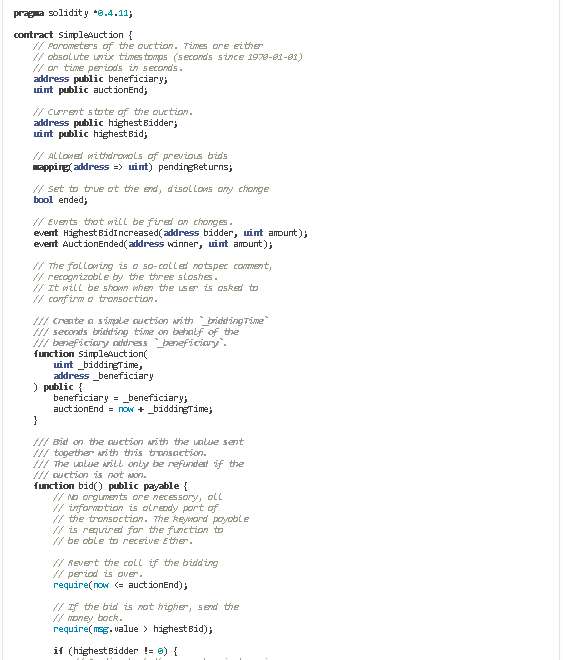 This smart contract works as follows: two parties and one party propose to get married. If both parties agree then contract status is changed to “married” and funds are withdrawn from both accounts, to sum up and save total funds into the new “joint” account. This account is now used as a family account. If any party wants a divorce then it should send a request and if the other party confirms the contract splits funds from the family account into halves and withdraws to separate accounts for both partners. Therefore, contract status is changed to “divorced”. 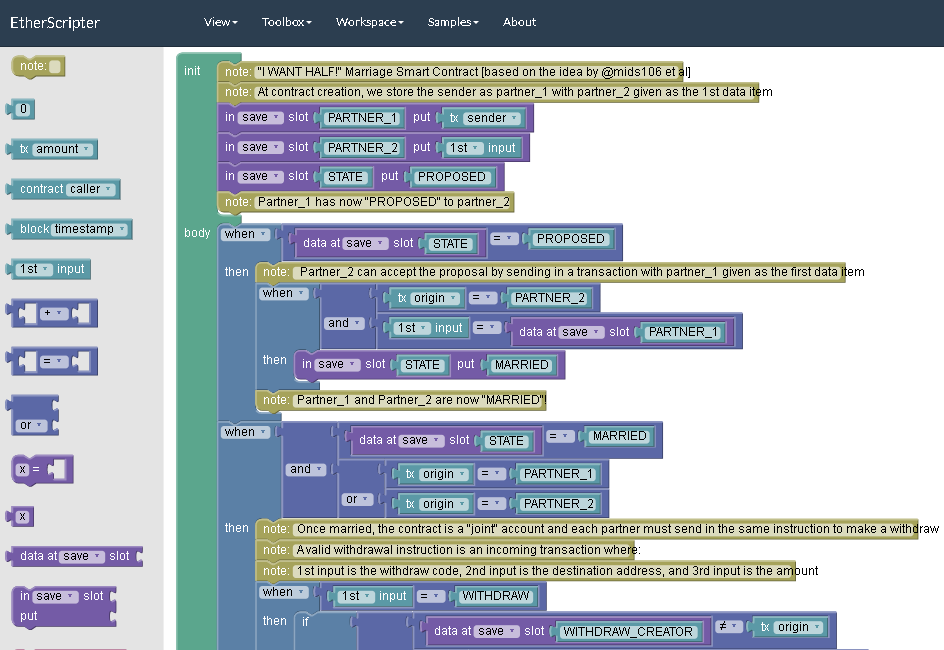 In the last few years, particularly within the last year, significant marketing changes have occurred. Most of these changes have been powered by digital transformations...

How to Handle Security and Privacy Issues in Digital Transformation

Digital transformation through technologies such as automation, the internet of things (IoT), and cloud computing, increases the chances of data leaks and security breaches. They...