In a dataset, the total number of features determines the dimensionality of it. Having a massive number of features in a dataset often reduces the performance of machine learning algorithms. In machine learning, having a large feature space which is n-dimensional and considering rows of data as points in the space usually form a small and non-representative sample. When the model tries to fit over many features, it causes low-performance issues and raises the need for feature reduction.

In machine learning and other such fields, the developers use the dimensionality reduction technique to make a simple model by avoiding overfitting a model and making it reusable for a different data set. This kind of model generalizes well and shows better performance on the provided dataset. There is a close relationship between the number of input features and the degree of freedom in linear models. Therefore, it performs well with linear models as well.

There are a lot of improvised techniques in use for reducing features from a dataset. In all the techniques, the algorithms try to find efficient results in the lower dimensions, representing the higher dimensions’ original data.

Out of so many advanced techniques, the original seven methods of dimensionality reduction are the following:

Principal Component Analysis (PCA) is one of the classical approaches to find the optimal linear transformations. In 1901, Pearson introduced this method. Later in 1933, Hotelling also used this method to illustrate the variation in multivariate data set regarding a set of uncorrelated variables.

Principal component analysis (PCA) is a data reduction method used to emphasize variation and identify healthy patterns in any given dataset. The developers mostly use this technique to make data easy to explore and visualize. Moreover, PCA is useful for eliminating dimensions for the data, which is in the higher dimension and hard to visualize.

PCA method tries to preserve as much information as possible in the given data while reducing its dimensions. Therefore, it looks for the projection that represents the data best in the least square sense.

All PCA does is rotate the axes, so the new coordinate system aligns with maximum variability in data. It usually discards components that do not contribute significantly to describe the original data. Furthermore, it removes dimensions from the rotated space without affecting the remaining components’ relationship, describing a lower-dimensional orthonormal basis. Hence the resulting space is still linear but with fewer dimensions.

These are the assumptions used in performing this method:

When the data goes through the reduction methods, it loses some information based on how much the dimensionality is reduced. Although each method works to preserve the useful information in the data, PCA works best to preserve information as much as possible. In this way, it minimizes the errors introduced by the change in the data.

These are the steps to perform PCA on some input data:

Compute the mean of the vectors.

Subtract the mean from the individual vectors.

Use A to compute covariance matrix C.

Compute the eigenvectors of C.

Compute the eigenvalues of C.

Since the computed C matrix is symmetric, the eigenvalues u1, u2, u3, u4,.., uN form a basis. In other words, the users can write any vector x as a linear combination of the eigenvectors.

Keep only the terms that correspond to the K largest eigenvalues.

How to choose an appropriate value for K?

In the PCA method, K’s value plays a significant role in the reduction because it controls the number of chosen eigenvalues. These eigenvalues, in turn, control the dimensionality reduction. Therefore, it is crucial to select the appropriate value of K that preserves the necessary information in the data, and that is why there is a definite criterion to choose it:

Error due to Dimensionality Reduction

The users can reconstruct the original vector using the above equation. However, some reconstructed error is associated with it because of losing some information while reducing dimensionality. Following is the equation to calculate the error of reconstruction:

The eigenvalues’ magnitude corresponds to the data’s variance along with the eigenvector directions from the geometrical standpoint. In drawing the graph, the eigenvectors represent principle axes along which data, or in other words, covariance matrix, show the most considerable variance. The principle components or the eigenvalues are the weight coefficients in the graph. 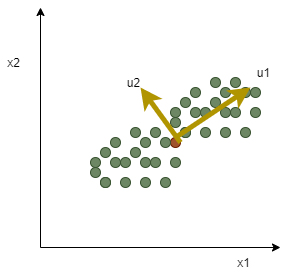 Note: the users can read more about this function and its various parameters in the sklearn documentation.

The Preprocessor Directives in C

The C preprocessor directives are executed before the compilation of a program. It is not a part of the compiler and it is a separate...

To find an item in an unknown list, a human would probably go from the beginning to the end of it, checking every item he...