Execute the following commands on your command terminal to download the Python libraries that you will be using in this article:

Execute the following script in a Python editor of your choice to import the classes and modules from the libraries that you just downloaded.

The dataset contains information about images of banknotes and corresponding labels that denotes whether banknotes are fake or not. The features available for a banknote image are variance, skewness, kurtosis, and entropy. The label has two possibilities: 0 or 1, where 0 stands for an original note and 1 denotes a fake note.

Let’s plot a pie chart that shows the ratio of fake and original currency notes in the dataset. Execute the following script. 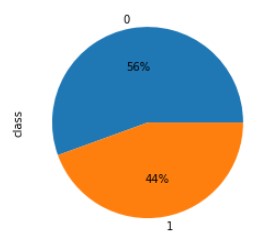 Divide Data into Features and Labels

Before a machine learning model is actually trained, it is a very good practice to scale the features so that all the attributes have feature values within the same range. The StandardScaler class from the sklearn.preprocessing module can be used for feature scaling as shown in the following script.

Once the data is divided into training and test set and has been scaled, you are ready to train your machine learning models. Several machine learning algorithms exist in the Python Scikit Learn library which you can use to train machine learning models for the classification models. A complete list is available at this link. You can use any classification model from this link. In this article, you will use the Logistic Regression algorithm. To train a model, you have to pass the training features and labels to the fit() method of the LogisticRegression class object as shown in the following script. To make predictions on the test set, you can use the predict() method.

To see how well your machine learning performs on the test set, the final step is to evaluate your model performance. To do so, you can use accuracy as a metric. Accuracy divides the number of correct predictions made by your model by the total number of records in the test set. To find accuracy, you can pass the actual labels and the predicted labels to the accuracy_score() method of the sklearn.metrics module. This is shown in the following script:

The output above shows that our model performance is 97.95% which means that our probability of our machine learning model for correctly predicting whether or not a bank is not fake is 97.95%. Impressive? No?

Let’s now see how you can make predictions on a single banknote instead of a complete test set. To make a prediction on an individual banknote, you need values for variance, skewness, kurtosis, and entropy of the image of the banknote. Let’s print the feature values for the 50th banknote in the dataset.

From the above output, we know that this banknote is not fake since the value of the class attribute is 0.

To find the label for the 50th note in the dataset using the trained machine learning model, you need to pass the information of the 50th note in the dataset to a standard scaler which scales your feature set. Next, you need to pass the scaled dataset to the predict() method of the model that you already trained. Look at the following script for reference.

The above output shows that our banknote is not fake which is the correct output.

EAN stands for European Article Number and is also known as the International Article Number. The most commonly used EAN standard outside the United States...

Numbers play an integral role in our everyday life. For example, numbers on the salary slip, numbers on our exam result sheet, and number on...