Concept of Asynchronous Programming in JS 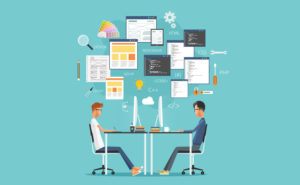 What is Asynchronous Programming in JS?

Asynchronous programming is the act of performing specific tasks at a particular time, and these are often referred to as operations. Programmers should ensure that processes get finished and eventually have their work done within a specific time.

What are Callbacks in Asynchronous Programming?

Callbacks are simply pieces of code that get called back after some operations have been completed. A callback is a function passed as an argument to another position, and the other process then calls the callback at some point during its execution.

How do Callbacks Function in Asynchronous Programming?

Callbacks are usually passed as anonymous functions but can also be defined as named functions and passed by reference. In addition, inline functions can also be used as callbacks.

Asynchronous programming is a great way to improve the speed and performance of your code. You can ensure that specific tasks are completed by using callbacks before moving on to other code sections.

This can help prevent blocking issues and make your code run more smoothly overall. In addition, by using inline functions as callbacks, you can reduce the amount of code necessary to achieve asynchronous programming in JavaScript.

However, as you might have noticed, in the real world, you sometimes want to do two things simultaneously. To be able to do so, we use asynchronous programming. How does this work?

An asynchronous function will not wait for its execution to finish before executing the following line of code. It will give you back control, allowing you to continue in your script (as if the code had been synchronous).

Then when the asynchronous code has finished its execution, it will automatically resume your script where it left off (as if the code had been synchronous) and give you back the control.

Asynchronous programming is a form where code execution does not wait for the completion of another process before beginning.

This type of programming can be used when you want to do two tasks simultaneously. It can also be used to improve performance by using system resources.

Technology is driving today's world. Many new technologies, programming languages are responsible for various pathbreaking software applications. This post is all about CLI commands of...

JavaScript and User Interaction JavaScript is one of the well-known programming languages. Developers mainly use JS in the Web browsers create an interactive and dynamic...